Attracted by the prospect of warm, sunny weather and better job prospects, Laura Lilly and Ryan Crawford made the move to Western Australia…

We both felt that Australia had more opportunities for us in our chosen occupations. Cornwall is a beautiful place to live but the job competition was intense and the opportunity to own our home felt unobtainable. We both love the outdoors and wanted a lifestyle to reflect that.

I [Laura] had visited the east coast of Australia in 2008 after living in New Zealand between 2007 and 2009. Ryan had never visited Down Under but was keen to see what I had been talking about. 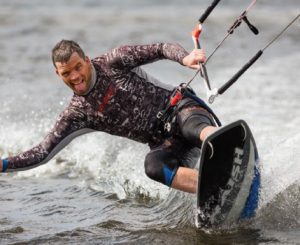 As Ryan and I approached our 30th birthdays we saw all our friends having babies, getting married and buying houses. We both felt we had so much more to see and do before any of that backpacking first before we reached our final destination, we composed a bucket list of all the destinations be both wanted to visit.

In October 2014 we made a decision to uproot ourselves and leave the UK heading for the promise of warmer weather and better job prospects of Australia.

Within two months we had sold all our belongings, resigned from our jobs and bought around-the- world flights. We had to move quickly as the Working Holiday Visa for Australia was only available to us until we turned 30, which was in January 2015.

We chose the Working Holiday Visa route as we weren’t 100 per cent sure if Australia would be for us. This visa meant that if we changed our mind we wouldn’t lose anything.

By 31 December we were flying out to Costa Rica to begin our backpacking adventures en route to Perth, Australia. We had a blast backpacking and hiking through Costa Rica, Peru, Vietnam, Cambodia, Thailand, Malaysia, Bali and New Zealand.

During our stay we even met a guy from Perth who gave us his contact details for when we arrived there. We did in fact meet up with him and have dinner at his house four months later!

ARRIVAL SURVIVAL
We landed in Perth on 10 April 2015 and stayed in a backpackers hostel. We immediately looked for work. Ryan landed a job working for a sail shade maker in Fremantle and I took a job working in before-and-after-school care.

We stayed at the hostel for about two weeks until we joined a company called All Pets. This was a house sitting service for people who didn’t want to put their pets into kennels. Our time working for All Pets meant we got a real experience living all over Perth in many different suburbs.

After three months of house sitting we started to look for farm work as the Working Holiday Visa can be extended for another year if you work on a farm for three months or more. Luckily, through a friend of a friend, we landed an excellent opportunity to work at Glenarty Road farm and vineyard in Karridale. We started the vine pruning and lamb work at the end of June and stayed on the farm until October. We made great friends with our hosts and met many more amazing people.

By this point we had seen and experienced a lot of places in and around Perth and we both liked the idea of living south of the river. Ryan’s work was going well and they welcomed him back after the farm experience. I still wanted a teaching job and found that jobs were hard to come by in Perth, so I applied for the Flying Squad.

This squad was like the flying doctors, but with teachers instead! We were flown out to remote and rural schools to work for short contracts ranging from four to 10 weeks. I was lucky and landed a 10-week position at an indigenous school in the outback, in which I was paid to travel to the job, and provided with accommodation. It was a nine-hour drive from Perth
to Meekatharra but I was able to fly to and from there on some weekends to see Ryan.

After my 10 weeks, I was offered a year’s contract with the school. It was a tough decision to make as it would mean that Ryan and I would be living apart for the year. The decision was made on the fact that if I took the 12-month contract I would be eligible for the 190 visa and could apply for residency. We both decided that it would be worth it as we wanted to stay and make a go of it in Australia.

Ryan continued to house sit for All Pets as it meant that he had no outgoing bills and he could save as much as possible. It worked well and he was only without accommodation for a couple of nights. During those nights he checked into a hostel.

Ryan is now running his own business repairing kites and sails, mixing his passion of kite surfing with his everyday life. With the growth of kite surfing as a sport in Perth the opportunity to start up his own business was a no brainer.
I enjoyed working in Meekatharra so much that I took another contract for 2017 with the promise to Ryan that it is my last year there. Teaching at the school has provided many opportunities, progressing my teaching career and putting me in a position where I can save to buy our first house.

We have also been to Augusta and Margaret River over the Christmas period and I have managed to fit in a trip to New Zealand to see some friends.

VISA PROCESS
Victoria at Sure Migration made the visa process so simple. Ryan and I were both working fulltime and felt that going through a migration agent was the best option for us at that time.

Victoria was so approachable and answered all our questions no matter what the time of day. She took the stress off with the paperwork and any worry about having the correct documents and certifications.

Victoria talked us through each process and provided us with a checklist of what we needed to do. Each step was quite detailed and there were so many things that had to be checked off and certified – especially with my teaching documents. Getting my occupational paperwork in order was the most time-consuming part because I had to obtain documents I had left in the UK.

We started the process in May 2016 and submitted our application in October the same year. By December 2016 our residency visas had come through, so it was relatively quick, although the waiting seemed to take forever!

LIVING THERE
We love the weather in Australia and especially love that barbeques are provided all along the beaches and foreshores throughout WA.

Most beaches also provide toilets and showers, which are kept clean. This to us is a great way to encourage families to spend days out together in beautiful places like South Beach Fremantle or Point Walter.

Ryan gets in the water every day because the climate is so much warmer and the weather permits it for longer than at home. There are so many options for outdoor activities and gatherings.

Moving to new areas can be quite hard but having a sport or interest made it so much easier to meet people. We have met most of our friends through kite surfing and joining online kite groups and discussion forums.

I think the best advice when you arrive in Australia is to get out there and join a sports team, club or group. And if you don’t have a hobby, be bold and take up something new! If you are constrained by time due to your work commitments research a good migration agent. Having an agent took all the stress away for us.

Life is good and it’s how you make it work that counts. Even though our journey has led us to living apart for a while we are stronger than ever and enjoy every moment together.

I think we will eventually take citizenship to secure our place here in Australia, but who knows what will happen? Right now, we are just enjoying our new lives in Perth and loving every moment of it.

We have both saved hard and are looking forward to the next step in our Australian adventure.