In search of a better work-life balance, Chris and Stevee Puzey decided to make the move to Perth, Western Australia…

After feeling that we were both working rather than living we decided it was time to enjoy more of a work-life balance. Going to work in the dark and returning back home in the dark makes you realise that there is more to life.

We had been on holiday to Australia a few times and instantly fell in love, I mean what’s not to love? Just walking along the beach you are forever seeing dolphins – and that is our new life now!

After a lot of saving and selling, we were lucky enough to have a couple of cars to sell. We wanted to leave with a secure amount in the bank after paying for all our bills to get us to Oz. 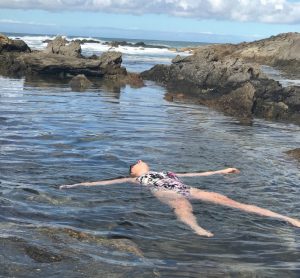 We spent around £25,000 on the move, which covered our visas, flights, shipping our belongings and transporting our dogs. We tried to sell our house in the UK but in the end we left with it being rented out. We are actually glad, now we are here, that we only rented it out as we will always have that house to fall back on.

MIGRATION PROCESS
We found the migration process quite simple with it just being the two of us as you have the time so sit together and go through it all.

Chris sat all the exams but the tough part was providing the evidence for his skills as City & Guilds denied all knowledge of his qualifications. Luckily he had print-outs of all of his online exams with City & Guilds to back the evidence up.

We chose to use a registered migration agent to help us with our visas – Victoria O’Neill, the director of Sure Migration. We actually popped over to Victoria’s house when we were on holiday in Perth a couple of years prior to our move. I mean, talk about a personal touch!

We both worked and wanted the migration process to be as simple as possible. We didn’t want to feel bamboozled and stressed with the process.

From meeting Vic at Sure Migration to getting our visas the process took around two years. We submitted all our information in April 2017 and received our permanent residency visas in September 2017.

The job process was quite a long one. Chris started looking for work once his Expression of Interest was accepted. He started looking on job websites such as Seek and Indeed but also started stalking CEOs from motor companies and heads of recruitment!

Claire Douglas from RAC WA got back to Chris and suggested keeping in contact regarding his visa application and if a job was to become available for his trade she would be in contact. In the meantime Chris applied for a job as manager of Kmart Tyre and Exhaust where he had to do a phone interview and a Skype interview. Chris got the job but they couldn’t give him a specific start date so he carried on looking for jobs! Claire Douglas from RAC WA then got back in contact with Chris regarding a centre development manager’s role for RAC Mandurah.

He had to carry out an automated video interview and was told they would be in touch if he was required for further interviews. Luckily, he got the email for an early morning conference call with the general manager and operations manager for Auto Services.

The interview went well, but then it was a waiting game to see if he had the job!

SAYING GOODBYE
We left our house on 31 January and our last week in the UK was spent with family in the Cotswolds. The week ended with a leaving party at a pub on the Saturday, where we danced until 3am!

It was emotional taking our two dogs Nala and Indie to Golden Arrow shippers – they flew out on 7 February, the same day we flew.

We then had a few more family get-togethers before Stevee’s parents drove us to the airport. What surprised us the most were the tears from so many people, and people we didn’t think would cry.

We flew via Palm Springs in LA to attend a friend’s wedding and it was whilst sitting in the departures lounge of LAX airport that Chris got the call to say that he had got the job! It was a big weight off our minds.

We then set off on a 4,000 kilometre road trip to Perth. This once-in-a-lifetime roadtrip, which took two weeks, flew by and the dogs were loving Aussie life on the beach everyday! We had an incredible time before we headed to a holiday rental in Cooloongup for the next six weeks.

ARRIVAL SURVIVAL
We had sussed out what area we wanted to live in when we were on holiday and we knew we were looking for a short-term rental south of the river.

A pool was a must and we found a great four-bedroom property with a pool in Baldivis. We will look to buy in a year or so. Our five-year plan is to go to Melville, where there’s a real family vibe.

Work is going well. Chris is working more reasonable hours, and with no evening or weekend work, that makes a huge difference. We are actually sat down at the table having dinner together in the week, something we never did in the UK.

An average working day for Chris starts at 8am and finishes at 5pm. The work has been very challenging but within a month he has helped the centre achieve its busiest and biggest turnover in the nine years it has been open, so things are going well.

We are loving living so close to the beach and every dog walk is just perfect. We are spending more time together and enjoying life. Just waking up to the sun to do 6am dog walks on the beach makes such a difference. The sun really does make everything better and people seem happier – for us, the balance here is perfect!

We can’t get over how social and outdoors-focused everything is here. We have just brought a paddleboard, so we are hoping to enjoy that aspect of life too! Our weekends are typically spent exploring our surroundings. We recently ventured into the Perth Hills and realised we have so much more to explore! Every weekend is going to be so exciting.

We miss the different seasons in the UK, and of course family and friends, but we already have Chris’s family coming out in October for his birthday and Stevee’s in January, so that gives us a real focus. As we want to buy a house there’s a real focus at the moment on saving, and to buy a jet ski!

The lifestyle here is so much better than the UK but anyone thinking of moving to Australia needs to plan properly. Plan where you’re going and what you want. You don’t want to move and feel like you have no connection with a place. In Perth, we really feel like we’re at home.